Today, it’s not only enough to hold a press conference to announce your election plans, as candidates discover – you’ve got to tweet it too!

Gov. Corbett kicked off his re-election bid Wednesday with a live event, and he tweeted that decision too simultaneously

“I am running for Governor of Pennsylvania!” — Governor Tom Corbett #pagov

This is a far time from the earlier days of election announcements, when candidates had to wait until the next day’s paper or until a post on a website could confirm their campaign.

I would watch for more and more of this as time goes by. 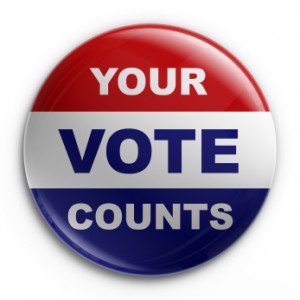 I got up early this morning to take care of my civic duty – I voted!

And you should too!

I know a lot of these local elections aren’t too exciting, but they make a big difference in your life and the lives of your friends and neighbors.

Plus, my mother wouldn’t think of letting me skip even the election for dogcatcher, so I’m obligated to lug my butt to the Shiloh UCC to cast my ballot and show my face. Number 14, what what!

In all seriousness, please take the time to go out and vote today – Check out votespa.org to find your polling place.

And good luck to all the candidates and reporters out there tonight putting in the long hours!

Yesterday was election night. Check out the results for the Valley’s elections here.

For journalists, that means a late-night shift including the newsroom staple: the election night pizza.

Pizza is cheap, most people like it and low-paid journalists will do just about anything for free food.

The Daily Item had them, and so did a lot of other newsrooms, as evidenced by tweets coming out of newsrooms from across the state. Here’s just a small sample.

END_OF_DOCUMENT_TOKEN_TO_BE_REPLACED

One of the most basic tenants of the American voting process is the secret ballot. No one but you and the machine has to know who you voted for – unless you tell other people, that is.

And with social media, it’s easier than ever to share that information.

Facebook had an “I voted” feature, where you could share that you voted, and even who you voted for if you so choose.Votes were registered in real time by location.

Here’s a snapshot of Pennsylvania’s graphic:

Foursquare also had a tracking feature for voters to participate in:

Did you broadcast your vote?

I tend to err on the side of not telling, just because I can’t, really. I can’t be perceived as favoring one side or the other.
Also, I don’t feel like explaining myself. I have my own reasons for the way I vote, and that’s that, in my opinion.

What do you think?

Make sure you get out to vote – and if you’re voting in the Susquehanna Valley, I may see you in my travels out to the polls.

And don’t forget, PA voters: the voter ID law is NOT in effect this election. You don’t have to show ID, but you will be asked for it.

What do you think about the voter ID law? Good idea or bad idea?

The PA Supreme Court seems to think it’s OK, just not for this election.

But if things hold up, it will be in effect soon and you will be required to show a photo ID.

By now, you’ve probably seen the video that’s become my latest obsession – the one with the little girl crying because she’s “tired of hearing Bronco Bamma and Mitt Romney.”

If not, allow me to make your day:

But I think there’s something very interesting here. Have elections just become too much?

In the three months I’ve been at the Daily Item, I’ve written a bunch of political articles – we all have. On Saturday, I followed people canvassing neighborhoods and making phone calls. It’s crunch time for them.

But without a doubt it gets tiring to turn on the TV every day and see another ad. Or read another horse-race article or see another poll result.

Should we stop covering it?

And when is it inappropriate to start thinking about the next election? Without a doubt, some people already are.

How do you tell people to stop it? There’s no law saying you can’t put up  political signs until a certain date. Or that you can’t speculate “who going to run in 2016” until at least 2015.

What do you think? Is it too much campaigning? What should we do about it?