The 50th anniversary of the Kennedy assassination is tomorrow and many people are stepping back to remember what happened – the good, the bad and the ugly.

We all the major highlights of the story: how the young and vibrant Kennedy was gunned down as his wife looked on and how she showed such grace and beauty in the eye of tragedy.

But some points of the story are less well-known and many of the reports this week have helped some of us, including myself, learn about them.

Like I had never given a thought to Oswald’s family. I just never put it together that he would have left behind a family.

I also never thought about his funeral and the role reporters – like myself – served: pallbearers.

And now, one of those Associated Press reporters – Mike Cochran –  writes about his unique relationship to the tragedy, serving as  pallbearer at Oswald’s funeral. 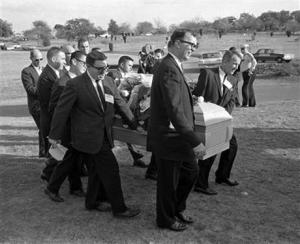 You can read his full story here, and it’s one of traveling with the story through time.

(I think Mike is the reporter holding a notebook and leaning slightly out there in front).

This passage was particularly powerful for me – it showed just how much emotion was tied to Kennedy’s death – even among those of us who were supposed to remain neutral:

No one else would follow; even the minister failed to show. Shaking his head ever so slightly, Jerry Flemmons of the Fort Worth Star-Telegram turned to me and said, “Cochran, if we’re gonna write a story about the burial of Lee Harvey Oswald, we’re gonna have to bury the son of a bitch ourselves.”

Sure enough, officials asked the gathered reporters to serve as pallbearers. I was among the first they asked, my reply not just “No!” but “Hell no!” Then Preston McGraw of United Press International stepped forward and volunteered, and with my top competition for scoops accepting the duty, I realized my error and joined McGraw and other reporters.

Some very powerful stuff from a witness to history – with a bit of the journalism twists I can appreciate.

What do you remember most about the Kennedy assassination? What have you learned this week?