On Saturday I had an assignment that took me through the notorious village of Centralia.

Centralia is well known by many as a creepy, weird place a la the wildly popular video game and movie franchise “Silent Hill,” which the creator said he based on the village.

The story goes something like this: There’s a mine fire in Centralia that has been burning for something like 50 years. Because the government says that’s dangerous (there’s been some incidents with sink holes and such) they’ve tried to buy out everyone’s home and pretty much demolished the place, leaving it a wasteland.

I have out-of-state friends who know nothing about the area, but they’ve heard of Centralia.

There’s still something like 2-5 houses there, but most of the town has become an overgrown shadow of a town, with sidewalks and streets lining nothing – just a relic of what once was.

Here’s the thing: I grew up in and around the Coal Region – so I’ve been through many times. I never got the “creep factor.” To me, it isn’t really creepy; it’s just, well, sad.

My parents and Pap remember visiting Centralia when it was once a thriving coal town. It was a place where families built their lives. Now, it’s just some overgrown weeds.

But anyway, here’s some photos – you can decide for yourself if you ever make the drive down Route 42. 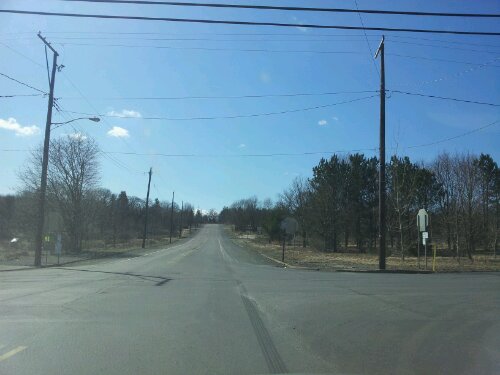 I saw the blue onion domes of this church from a distance – they’re barely visible through the overgrowth. I wanted to see if it was maintained at all, but I couldn’t get close enough.